In 1885 Keens Chophouse opened independently under the ownership of Albert Keen, by then a noted figure in the Herald Square Theatre District. Keens soon became the lively and accepted rendezvous of the famous. Actors in full stage make-up hurried through the rear door to “fortify” themselves between acts at the neighboring Garrick Theatre. By the time Keens celebrated its 20th anniversary, you could glance into the Pipe Room and see the jovial congregations of producers, playwrights, publishers and newspaper men who frequented Keens. 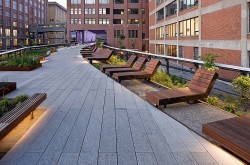 Next Listing The High Line